The art of the absence of evidence

This study comes from Ian Lane who asked whether the authors were, “entitled to believe that their conclusion is ‘true’.”
Read more → Before we talk about the study, I think it’s important to differentiate between “high-protein” diets and “low-something else” diets. “High protein” means that the first maconutrient of importance is protein and when figuring how much carb and fat to eat, the calories not taken up by protein are then taken up by the other two macronutrients. “Low something-else” means that the first macronutrient taken into consideration is the “something else” (these days it’s usually carbohydrate), and then the rest is available for fat and protein. This doesn’t mean that a low-carb diet is automatically a “high protein” one, or, more importantly, that a “high protein” diet is automatically a low-carb one.
Read more →

Hey, ass-hat with the abstract link. Yeah. You. 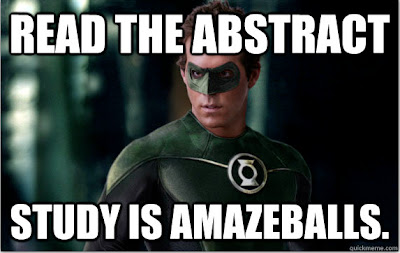 [Edit: More than a few readers gave me feedback about my use of a derivative of the r-word, which has gone from a medical term still used in medical journals to a pejorative one when used in a derisive context. A small portion of my patients are developmentally delayed and understanding the power of language (being more than moderately opposed to, “That’s so gay,” referring to anything more offensive than a bus of drag-nuns–which really isn’t offensive at all since the Sisters are AWESOME (honestly, I’ve been to their parties); so I guess”gay”=”awesome”), I’ve replaced it with “Ass-hat”. I have Googled its etymology and can find no reason not to use it. Now, onto the post.]

The rate at which psuedo-information flies around has now reached epic proportions. And not in a good way.
Read more → Martin Bland’s “How to Upset the Statistical Referee” should be mandatory reading for all researchers. It’s short, gets to the point and, if everyone paid ACTUAL attention to it, would kill this blog.
Read more →

This study makes no claims. But I bet other people will. In the fitness industry, everyone’s trying to get or stay ahead. And while there are lots of ways to do that, tapping into published research is one of the more common ways to “reveal” something new and come across as being more leading edge than the next guy/girl.

I would argue that most people who post links to PubMed haven’t read the actual study, but are just browsing abstracts. I’ve written about what abstracts are good for in the past. But it’s been a while since I’ve really taken the theme up.
Read more →