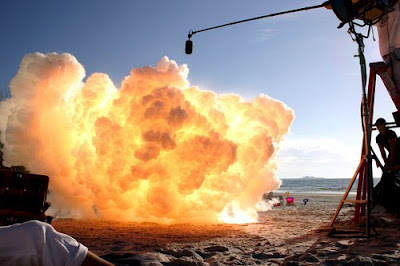 Snarkiness aside, I’ve been wanting to discuss nitric oxide or NO supplements (as well as pre-workout drinks) for a long time; but oddly enough, the literature was incredibly sparse on the topic in terms of studies involving humans and outcomes training individuals would be interested in. NO-type ingredients seem to be in everything, to the point where you don’t have to _decide_ to take an NO-related ingredient, you probably just are, particularly if you’re taking anything that is designed as a pre-workout supplement. In fact, it’s amazing that they can stuff more than 30 ingredients into a single pre-workout drink such that it will still fit into a couple of scoops.

So this review has been a long time in coming. I apologize for not weighing in sooner.

Pre-workout drinks aren’t new. They’re almost old enough to be passé. NO “boosters” used to be (and still are) sold separately, but now it’s all “batteries included”. In fact, pre-workout drinks are chocked with all sorts of ingredients, which, when studied alone, may have some effects but most of which have been poorly studied or not studied at all, other than very basic studies which contribute to theoretical conjecture about effectiveness. AND generally, the doses of these ingredients is far below their studied doses in which they may or may not have had a beneficial effect.

So, why is nitric oxide purported to be important? The claims are that increases in NO in the blood results in increased blood flow, muscle “pump” and better performance (more reps, or more weight, or both). Basially, they’re supposed to make your muscles EXPLODE! But no one has actually studied NO boosters (in particular, L-arginine) and any of these claims. Until now.

This study was a randomized cross-over design trial. This means that all of the subjects got all of the study supplements but in a random order with a period between supplements with no supplements to allow for the previous supplement to “wash out” (which is why it’s called a wash-out period).

There were 5 supplements tested in this study: a placebo, a glycine-propionyl-L-carnitine supplement, and 3 commercially available pre-workout drinks with NO-boosting ingredients.

Each subject went through testing 6 times with one week between each testing session. Testing was done after a minimum 8-hour fasting period (usually overnight). The subjects were asked to rate their “pump” from 0 to 10 (with 0 as no pump and 10 as the most intense pump ever experienced). Circumference measurement was taken of the torso at the nipple line with a tension regulated tape measure. The subjects then drank their randomly-assigned pre-workout drink. The performance tests didn’t start for 30 minutes after the drink was consumed (60 minutes for the carnitine supplement). Subjects were allowed to drink as much water as they wanted to, but no other food or drink.

Performance testing consisted of a warm up of 10% of pre-determine 1RM for bench press throws followed by 3 bench press throws using 30% of the 1RM as a test of muscular power. The best attempt was used in the analysis. A sensor was then placed on the anterior deltoid to measure tissue oxygen saturation with near infrared spectroscopy.

The subjects then did 10 sets of machine bench press with 50% 1RM. Each set was performed to muscular failture with 2 minutes of rest between sets. Reps and weight used were recorded. The subjects were then asked to rate their pump again and the torso circumference was re-measured.

Blood samples were taken prior to testing and within one minute of finishing the tenth set of bench press. I’m not going to get into the biochemistry of this study because frankly, I don’t think we really care what the biochemistry looks like so much as we are concerned about whether any of this stuff works in the gym.

[From a design and reporting perspective, this paper lacks a lot of information. We are not told how the subjects were selected, or what criteria they used to exclude any subjects that might have been in the study but weren’t. We are not told how the subjects were randomly assigned to the order in which they received their supplements; or exactly who was blinded to what. The authors mention that all the supplements were fruit punch flavour, but we all know that different companies’ fruit punch flavour DOES taste differently. Whether you could tell if you were getting active ingredients or not just by the taste alone is debatable, though if someone had already been using a particular pre-workout drink regularly before, they would probably be able to tell their regular drink from something that wasn’t their regular drink. I know that I can tell the difference between different protein shake formulations. Whether I could name them like some sort of oenophile (i.e. a wine taster, “This is an ON whey isolate premium line with a hint of branch-chain amino acids and a creatine finish from the Illinois Valley region…*smack smack*…2008, which was a good year”) I have my doubts.]

The authors used ANOVAs to test for differences between and within each supplement. Most of it is moot, as you will soon see. [Yes, I just said the statistics are moot. Two-headed calves aren’t far off.]

This study managed to recruit 19 guys. All the subjects lifted weights at least 3 days a week for the previous 12 months with the majority of subjects lifting more often than 3 days a week and more than 12 months. The average age was 24 years (SD 4 years). Interestingly (this is for you, Brad) these authors did report some training history. Average number of years of weight lifting was 7 years (SD 4 years) and hours of weight lifting per week was 4 hours (SD 2 hours). The average 1RM bench press was 150kg (SD 39kg). That’s 330 pounds.

The meat of the data is Table 3. This is one of those rare situations in which doing the statistics is relatively useless. Since a non-significant p-value cannot positive rule out whether the results observed were caused by chance alone, doing the test doesn’t change the interpretation. As in previous reviews in this blog, it’s the actual numbers that are important. The difference between all of the groups for power, reps in the first set of bench press, total reps, total volume load and even perceived exertion are all REALLY close to one another. Unfortunately, all the variances in this table are standard errors and so the variance looks much narrower than it actually is (multiply the standard error by the square root of the sample size for the standard deviation, which in this case, is 4.35 ish). However, even after converting the variances to standard deviation, the only measurements that are affected to any large extent are the power measurements (not particularly important in the grand scheme of things unless you’re a power-type athlete), and the reps in the first set of bench press, and the total volume load (which gets magnified quite a bit, and is perhaps where one of the downfalls of this study lies).

BUT having the standard errors readily available means we can make comments on the precision of this study quite easily (i.e. what is the range of plausible values if we were to do this experiment over and over again) and because the error values are so low (except for total volume load), it’s unlikely that we would obtain a much different result over repeated experiments with subjects randomly drawn from the same population.

Looking at the oxygenation results, all the numbers are again, very close to one another. We still don’t appreciate any noticeable differences, despite the fact that there was one significant p-value that favoured SUPP1.

When we look at the circumference and “pump” measurements, we see that guys generally say they feel like they’re getting a better pump, but it’s no bigger than when they were taking nothing. Circumference-wise (which should theoretically go up) shows that while it does go up after working chest, it doesn’t go up any more than when they were taking nothing, or taking the placebo. Again, these variances are all standard ERRORS (you can do the same multiplication if you’re that curious). [Despite all the reporting shortcomings, it doesn’t really chance the interpretation of the paper, since any failure of randomization would result in a bias away from finding “no difference” (e.g. if there was some advantage to getting supplement C as the second supplement and they ALL got second, we would expect supplement C to do better). So even in a methodologically worst-case scenario, this study still pans out.]

As I’ve recently learned, the supplement industry is largely a claims-based industry. And as I’ve also come to realize rather recently from some reading, food product companies don’t care if you actually consume their product, as long as you actually buy them. If you put these two factoids together, a supplement company only has to have enough of a claim to make you buy the supplement, regardless of whether you consume it or not; and regardless of whether it works or not. To this end, many companies seem to have veered away from producing research that is of practical benefit to support their claims and have resorted to using physiological-type studies to support their claims (i.e. L-arginine is a precursor to nitric oxide synthesis, therefore if it can be shown that putting more L-arginine in the body (either orally, or intravenously) increases the levels of L-arginine in the blood, it can be DEDUCED that nitric oxide and all of the purported effects of such also increase). But from a consumer point of view, increasing arginine in the blood means nothing if it doesn’t make one’s training more efficient (from either a work or results perspective).

The bottom line: There may be a psychological benefit to taking a pre-workout drink. How much more work you can do in a gym as a result of said psychological benefit is probably negligible in the grand scheme of causing muscle growth or fat loss. Dumbo needed a feather to make him believe he could fly, but the reality (such as it is in a Disney flick) is that he could fly without it. You can probably fly just as well without a pre-workout drink.

P.S. Dear supplement companies, why would you put a theoretical vasodilator contributor (L-arginine) in the same drink as a known vasoconstrictor (caffeine)? Just curious, mostly, as I must be missing something.